Salmon is one of the most popular species to target when fly fishing. Let’s take a look at everything you need to know to get you started.

A brief introduction to salmon

It’s always good to know about the fish you’re going after.

Knowing about their life cycles and habits can help you to understand when is the best time to fish for them, and where you might have the best chance of catching one.

Salmon hatch eggs high up in the river system, and once hatched, they undergo a long process before swimming out to sea.
Initially, the hatchling is known as an alevin, before morphing into a fry. After a year or so, they become salmon parr which looks similar to brown trout, before they turn from brown to silver, known as salmon smolt.

The smolt heads out to sea to feed for anything between 1-3 years before their instincts urge them back to where they came from to hatch their own eggs.

Smolts that return to their home river after one year are known as grilse and typically weigh 4-6lbs. Salmon that spend more than 2 years at sea will return larger, weighing anywhere between 7-20lbs or more.

When they reach the river system in the UK, they begin the long, tiring journey of heading upstream – and this is when they’re prime targets for anglers.

When salmon return to freshwater from the sea, they may still have some residual feeding behaviour, which will prompt them to take a fly on instinct. This behaviour decreases, though, the longer they are in freshwater.

So when they bite on a fly presented by an angler, they might not be taking a snack. Rather, they’re lashing out at a perceived threat.

Salmon are highly prized due to their rarity and also for this aggression and fighting spirit they exhibit – it can be a hard-fought battle between salmon and angler when one latches onto a fly, and there’s no telling who’ll win the fight!

Can you catch salmon in the UK?

There are salmon in rivers all over the UK – although not as many as there once were, unfortunately.

So technically, yes, you can catch salmon in the UK, but a better question perhaps is where and when you’re allowed to.

The regulations around fishing in England and Wales are comprehensive, and the rules around salmon are dictated by regional bylaws, so always ensure that you’ve read up on the laws of your local area before you head out to fish otherwise you could face a hefty fine.

You’ll also need to buy a permit. In Scotland, you don’t need a permit (unless you’re fishing in the Border Esk), but you do need permission from the landowner. In Northern Ireland, you need a rod permit.

Wherever you plan to catch your first salmon, whether it’s in your local river or on a weekend trip away from home, check the local bylaws as these will state:

When’s the best time to fish for salmon?

Now you know the rules, when exactly is the best time to fish for salmon?

These fish start to enter rivers in the UK from the sea in January, and the numbers gradually increase over the next few months.

Some rivers are known for being ‘spring’ rivers, with the numbers of salmon being highest in the spring months, whilst others are ‘summer’ rivers and some are ‘autumn’ rivers. 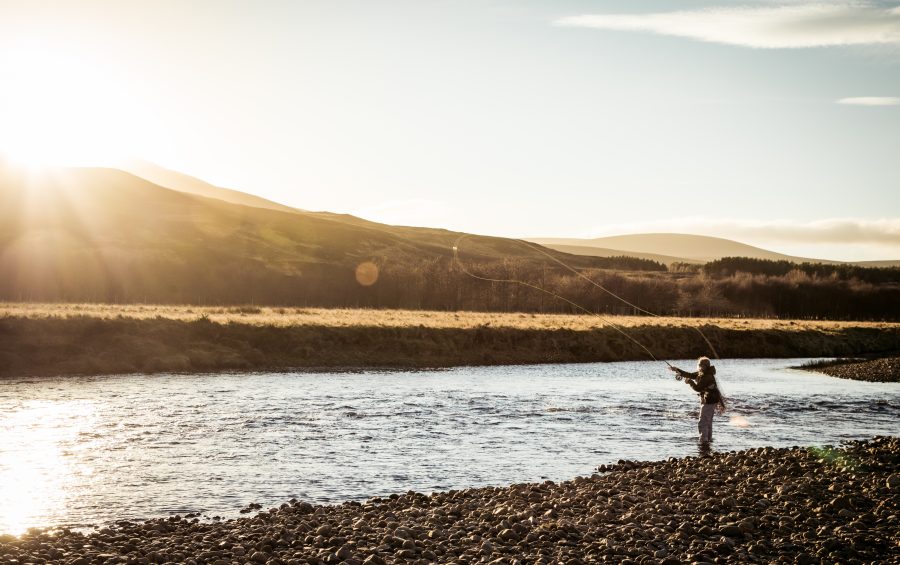 Get chatting to your local angling club or join our global community of fly fishing enthusiasts to connect with like-minded people and find out more about when the rivers in your area are best for salmon.

For beginners, we think it’s best to choose a river that’s either a late spring or summer river.

You’ll have better weather, an easier time on the river, more hours of daylight, and you may not need to use more specialist flies and fly lines that are needed when the river is higher later in the year.

Salmon returning to spawn are tired from their journey upstream, and they can often be found resting in rock pools or waiting to get over weirs.

Every salmon pool is different and they’re not a guarantee of a catch!

What tackle do you need for salmon fishing?

If you’ve fished for trout before, you’ll find that salmon fishing is a slightly different game. Let’s take a look at the key kit you’ll need.

One of the key differences in the tackle you’ll need is that salmon fishing is often done with a double hand rod or a switch rod rather than a single-handed rod – although this is very much dependent on where you’re fishing, and isn’t set in stone!

On small rivers and lakes and larger rivers when the water level is low, you might get on better with a single-handed rod, as this allows you to be more gentle when presenting the fly.

However, if you’re on a bigger river, such as the Tay in Scotland, a double-handed rod will come into its own. You’ll need to lift a longer length of line and cast it further. You’ll also be using large, heavy flies – both of which are much easier to do with a double-handed rod.

If you’re looking for a good all-rounder, a double-handed rod of roughly 13-14 feet should work for most occasions.

Your reel can be the same one you’d use for catching any other species. Make sure you have a spare spool fitted with a sunk line.

It’s a good idea to have a selection of flies and as mentioned above, you may want to include some large, heavy flies. Choose a good range from small to large and you should be set for any eventuality. 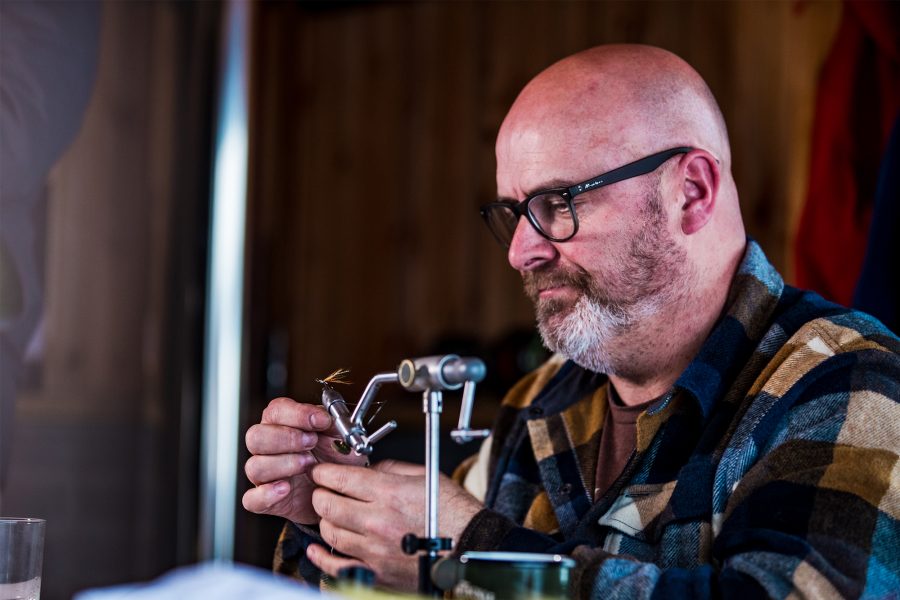 Look out for lines that are specifically designed for salmon, such as the SDS Tactical Salmon Lines, which are designed specifically for fishing environments where presentational techniques are pivotal to success.

Again, leaders specifically designed for catching salmon are the best choice, like the SDS Tapered Salmon Leaders which are abrasion-resistant and ensure perfect fly turnover cast after cast.

How to start fly fishing for salmon

Probably the most effective way to start fishing for salmon is to go out with a guide.

Local, qualified guides know the rivers like the back of their hand and will be able to give you invaluable insights on the best fishing spots and flies to use.

They’ll also give you tips on techniques, so you can avoid creating bad habits from the off.

If you’re new to salmon fishing, it can be quite demanding physically, so a guide will also help you to understand how to cast efficiently so you don’t feel too sore the next day!

The most important thing when it comes to fly fishing for salmon is to enjoy it! There are no set rules and every region is different.

You may find that you need to try out a few different techniques, experiment with different flies, and maybe even try fishing at different times of the day, but eventually, you’ll get your first catch – and there’s nothing quite the fight with a salmon!

So that’s it, you’re ready to start salmon fishing. If you still need some equipment, head to our Shop next to buy your kit.